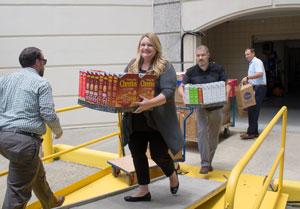 When the flooding hit the FACES building, many of the items in the foodbank’s pantry were destroyed by rising waters. In response, Virginia Credit Union employees launched a drive for breakfast cereal, one of several warehouse staples wiped out by the flooding.

Generous employees added boxes of cereal to their own shopping, and soon a friendly competition between the credit union’s departments got started. In the end, employees contributed 1,577 boxes to FACES.

Last week FACES sent a truck from Farmville to pick up a load of cereal from the credit union’s offices. It was the second shipment of donations from credit union employees.

The 1,577 boxes of cereal come on top of a fund raising effort that Virginia Credit Union, the Hotel Weyanoke, and other local businesses and credit union members organized for FACES. That effort raised $31,770, with the check delivered in late June.

VACU employee Sara Justice was key to both efforts. Justice, a Virginia Credit Union employee from Farmville who coordinates the credit union’s community outreach committee, spearheaded the emergency effort to help FACES get back on its feet.

A financial cooperative serving more than 265,000 members, Virginia Credit Union offers a variety of affordable banking services, loans, mortgages, and free financial education resources, with a focus on helping people be more confident with their finances. Virginia Credit Union is an equal housing opportunity lender and is federally insured by NCUA.